Let me tell you about my great friend and Brother Mike Kula, Rho Delta `09.  Mike is easily one of the most _____ people I know.  I tried four different words in that blank.  None of them work.  I can’t ever describe Mike to people.  You just sorta have to meet him.  Rather than adjectives, let’s try some anecdotal evidence:

Mike and I helping with Miami's Greek Move In

You know how most people choose their favorite sports teams based on geographic proximity?  (i.e., they grew up in Chicago so they like the Bulls, Bears, Sox and Blackhawks).  Keeping in mind that Br. Kula has lived in Ohio his whole life, here are his favorite teams:

Me neither.  Let’s continue…

Mike and I at the January 2011 Colts-Jets Playoff game.

Mike will almost never touch his drink until he has finished his meal (thanks for noticing this, Danny Henderson).

Mike hates salad.  Excuse me, he can’t even look at salad. He once moved seats to the other side of the table so that he wouldn’t have to look at the colossal salad a person in his direct field-of-view was eating.

He can recite every President of the United States.  Forwards.  Backwards.  However you’d like.

In high school, he convinced nearly 100% of his friends that he was born in Canada.  I called his mother for verification.  She upheld the ruse.

In the summer of 2010, Mike drove from Columbus, OH to Seattle, WA in 3 days to attend the 169th Convention.  I still compliment him on this feat with regularity.

Finally, to get to the point of today’s  blog:  Mike is OBSESSED with Colin Cowherd.

In case you don’t know about Colin Cowherd (have you been living under a rock?)  he is the host of a daily ESPN Radio show where he tells the blunt truth.  The man is brilliant, callous, hilarious, and almost always right.  He infuriates people but that’s mostly because he expresses his opinions with such painful truth.

How with-it is your Alpha?  Be honest.  Are your Brothers aware of their surroundings?  How relevant is Chi Psi on your campus?  How do you stack up against other Alphas?  Expecting to win some awards at convention?

I’m here today to offer a reality check.  Having read through Annual Reports for virtually every Alpha in Chi Psi, I must say that there are some things I cannot let slide.  I’m going to put on my Colin Cowherd hat and rant.  I feel as though we could all use a dose of with-it-ness.  Hide the children.  You’ve been warned. 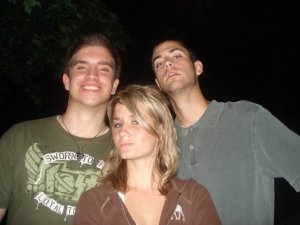 Bid acceptance levels below 70% must stop.  Have you ever considered that when your Alpha gives a bid to a potential, it gives away a small piece of Chi Psi?  For example, to see that an Alpha gave out around 20 bids and got 11 accepts drives me nuts.   First of all, how do you not know how many bids you gave out?  Aren’t those a HUGE deal?  Shouldn’t someone be keeping track of that?  Second, that means there are 9 invitations to be part of our Family sitting in the trash somewhere.  Engage more Brothers in recruitment, be more selective about who you bid, and stop throwing junk against the wall to see what sticks.

Community Service:  “We accomplished our community service goal by achieving more than 100 hours of community service in the past semester!!”  And how many Brothers are in your Alpha?  “Um, about 45.”  Get a clue.

Less than three community service hours per man in one semester?  And you’re happy about that?  Really?!?!  It’s time that we get the collective wake up call and realize our collective sentiment due to our fellow students and to all mankind.  As a Greek organization we are called to serve those around us.  Dig in, get your hands dirty, and make a difference.  You could fall out of bed and do 2.5 hours of community service per semester.  Let’s step our game up.

Y'all suckers need to get a clue!

If you have a clue, congratulations.  If reading this blog was a wake up call, then use the summer to find some inspiration.  Expectations are changing; they’re being ratcheted up.  Now is the time to honestly evaluate your situation and start planning for a better future.

One response to “Is your Alpha clueless?”